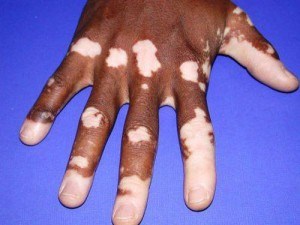 Vitiligo several clinical forms, where often these forms determine the decision taken by the doctor to treat a patient, where the doctor is often made into account the place of vitiligo patches are placed, as the spots in non-hairy areas, and the cure vitiligo decreases whenever vitiligo exists on Parties and away from the center of the body.
And often we see patients with vitiligo widespread area includes more than 50% of the body area which is difficult to treat known treatments for patients with vitiligo, here we have to focus and think well, you white spaces carried by the patient with an ugly color? Then what is the problem if all the patient's skin become white in color?
Often rush patients to answer and say no, we do not want this color, and if asked why often do not have the answer, let us discuss this subject, that whiteness received by the patient vitiligo when whitening skin fully is the whiteness of acceptable and normal and almost no ugly as imagined patients, what Mana to become the color of a person like any European person blanks acceptable aesthetically and socially, the other issue of concern to the patients is the problem of exposure to the sun, and the answer is they can and sunscreen and a broad-spectrum applied before going out, and this is not a problem, as all people with skins Fatiha must apply the visor Solar before you go out and it is not special only patients vitiligo, or patients with bleach, but do not deny that the increase of preventable and keenness of sunlight and this is not difficult at all, while for male patients Everything on them is to avoid as much as possible exposure to the sun, and apply protectors and broad-spectrum sun.
The material used to bleach a substance Monobenzyl ether of hydroquinone
It is a relatively safe substance, but not required to be sick pregnant, and used this material with a concentration of 20 to 40%, where the patient has Bdehnha twice daily treatment lasts from six months to two years depending on the affected area vitiligo. We recommend bleaching where the patient behind the area where the district does not move until after the completion of the previous whitening zone area, and is worth mentioning that this method keeps the natural hair color.
There is also a type of vitiligo and that is not responding to treatment and is usually Terminal vitiligo (ie, which affects the ends of the Parties), a possible treatment method mentioned above.
What I want to say here that the former patients Balchuklin of vitiligo, most often spend years of their lives moving from one doctor to another and from one center to another, spend a lot of money and time but to no avail. What if this inhibitor patient bleach often used method, which takes no more than two years, applied ointment alone at home without having to visit the centers and doctors frequently I think that it will save time and money.
This special treatment is only for patients with vitiligo and vitiligo patients Terminal, which is meritorious.