Press Statements
A cooperation protocol signed with the University of Tehran 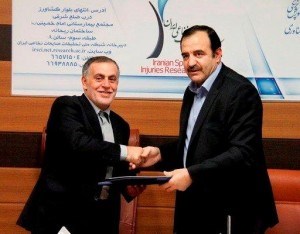 On 04.11.2013 a cooperation protocol was signed between the Great Prophet Hospital (r) between Hamah Tehran - Imam Khomeini Hospital (Kdh) in order to enhance the medical and scientific cooperation.
The agreement was signed on behalf of the Great Prophet Hospital (r) Director-General Dr Mohammed Bashir and Director of the University of Tehran Khomeini Hospital (Kdh) Protocol Dr. Mehrdad Salehi.
Based on this agreement, it will be cooperation in the field of doctors, technicians and nursing training in Imam Khomeini Hospital (Kdh) will also be cooperation in the promotion Research Center of the Hospital of the Great Prophet (r) and take advantage of the rich commercial vehicles in this area of the University of Tehran.
It also included a visit Great Prophet Hospital (r) to visit a number of hospitals and research centers, where was the beginning of the Faculty of Science of the nerves of the University of Tehran, and had a meeting with a very important d. Rizvi in front of me (Director of the Institute of Neuroscience and director of the Imam Khomeini Complex (Kdh) Medical, d. Narose Abbas (Deputy Director of the Institute) and D.mehrdad Salehi (Imam Khomeini Hospital Director (Kdh)).
It has been researching ways of cooperation and mechanisms and terms of reference that could send trainees from Lebanon to train them. Protocol-2
After that visit was to stem cell research center at the University of Tehran, was found on the scientific conditions to promote such center, it has been identified ways of cooperation in this area and the mechanics of communication in the future. This visit was followed by a tour of the organs and tissues Bank Center.
One of the important meetings held by the delegation, a meeting with an official of international relations at Tehran University d. Arabs Khrmend, where they discussed the mechanism of sending doctors and students in Tehran University and the conditions for doing so.
In addition to the numerous meetings that took place in Tehran University, which has been mentioned some above. It has been visiting Tehran Heart Center (Tehran heart Center) and a meeting with Prime Center d. Karimi, the director of the center d. Ghasemi and head of research center and head of the Department of Electricity Heart d. Said Sadeghian.
During the meeting also agreed on cooperation between the Great Prophet Hospital mechanisms (r) the epicenter of Beirut to the heart - and the heart of the center of Tehran.
The delegation also visited Sasan Hospital and a hospital in Tehran seal of the prophets, and Razaviyeh hospital in Mashhad.
It was an important occasion for the artistic experience of these hospitals in the Islamic Republic of Iran in various disciplines and services.